We also learned that barriers too often prevent inspired and eager Americans from serving. Repeatedly, we heard from Americans who were not aware of opportunities to serve, are not eligible for the service options they seek, or want to serve but cannot afford to participate. Still others face the challenge that there are simply not enough opportunities for all those who want to serve.

These barriers vary across military, national, and public service, but all result in limiting the opportunities for more Americans to serve. After the shift to an all-volunteer force in , young Americans from certain communities became more likely than others to join the military. For example, 45 years ago, about half of enlisted recruits came from the American South and West; today, that number is nearly 70 percent. Today, about 4 in 10 young Americans say they have never even considered military service.

The military instills values and knowledge, while providing opportunity for both the individual and our country. It is a wonderful choice for students, and I wish the educational system would promote it more. We heard concerns from both military members and those who have not served in the armed forces that, as the gap between the military and the rest of the American public widens, the awareness of the military and its opportunities decreases. This limits otherwise qualified young Americans from gaining the experiences and benefits of military service.

We also heard concerns from many currently-serving military members about the false narratives or perceptions about the military from television, movies, the internet, and video games: depictions that tend to focus on the most dangerous jobs and can at times be inaccurate.

In addition, we met many young Americans who are not eligible to join the military. Under current standards, 71 percent of Americans ages 17 through 24 do not meet the qualifications for military service. Others result from changing attitudes. Other barriers may be explained by increased rates of diagnosis and treatment of mental and behavioral health issues. 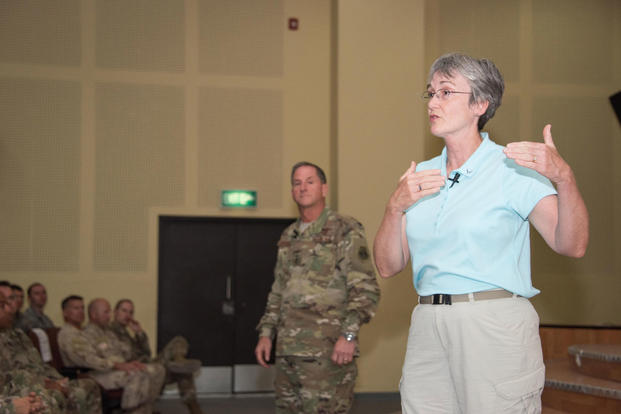 We also learned Americans who are ineligible for military service are rarely informed about opportunities to serve our country in either national or public service. All these barriers—lack of connection with, awareness of, and eligibility for military service—are depriving Americans who would otherwise want to serve of the opportunity to do so. Every year, hundreds of thousands of volunteers, not-for-profit organizations, and national service members deliver critical services to Americans, such as disaster relief, humanitarian aid, education, conservation, and protection of natural resources.

Typically, national service members include young adults who view service as a pathway to college or a career, college graduates who want to improve their community or live abroad while gaining valuable experiences, and older Americans who have retired from the workforce but want to keep contributing to their communities and the nation.

Unfortunately, far too few Americans even know these opportunities exist. More than 60 percent of young people ages 14 through 24 are not aware of service-year opportunities. Some also benefited from the services of a national service program when they were younger. We met Americans whose lives were changed by their service opportunities.

Looking for other ways to read this?

Graduation was approaching, and I knew I was on my own to pay for college. When I heard the words, 'there are 20, Americans This is citizenship at its best,' I was sold. We tutored, built trails, painted houses, and supported the Olympic Games. It's all about service, no matter the uniform. We also engaged with some Americans who know about and want to volunteer for national service but are unable to participate because they cannot afford to do so. For example, while AmeriCorps provides financial support to its members, the living stipend is typically near the poverty line and cannot reliably cover necessities for some participants.

Nevertheless, we have heard repeatedly that public service recruiting and hiring practices are out of touch with the realities of the modern workforce and insufficient to meet the needs of the many talented and dedicated public servants working across all levels of government. Many civil servants we met are frustrated with how they are frequently portrayed and perceived as being ineffective, though they provide the nation with valuable services.

They repeatedly expressed to us that these sentiments lower morale and discourage younger Americans from pursuing public service careers. Civil servants and others also told us that the federal hiring process is too slow, fails to accurately assess job applicants, contains a variety of inflexible hiring preferences, and many times fails to hire anyone for open positions.

Existing rules and regulations make leaving and returning to federal employment unnecessarily difficult and discourage employees who value flexibility and the ability to move from one organization to another. These problems seem especially severe when it comes to younger Americans.

The program was actively recruiting people with science, technology, engineering, and mathematics backgrounds, and it sounded like a great way for me to leverage my skills and serve my country. One memorable experience I had with the PMF was my rotational assignment, which introduced me to new collaborators, further developed my professional and scientific proficiencies, and showed me that the international community looks to our federal agencies to lead efforts that benefit the public globally.

I look forward to a long career in public service that will allow me to manage and develop projects on the forefront of radiation protection. Similarly, government officials at all levels told us that it is difficult to recruit and retain workers with high-demand skills, such as cybersecurity workers and health care providers, due in part to competitive market pressures. While meeting with Americans across the country, we were struck by how often we heard people speak about the importance of a strong civic education.

We are far from the first organization to make these observations. In fact, our nation has a robust network of not-for-profit organizations devoted to helping schools deliver quality civic education to students from elementary through high school. Forty-two states and the District of Columbia have passed laws that require some form of civic education prior to high school graduation.

Yet we also learned that the standards for civic education vary greatly across our country and that, in the past decade, the federal government substantially reduced federal funding and grants focused on supporting civic education. The Commission is charged with considering a range of proposals to strengthen the pathways to service, help the nation defend itself against future adversaries, and break down barriers to military, national, and public service.

Below are some examples of alternatives that we intend to discuss at public hearings and in continued conversations with the American people in the coming months. Although the United States has never adopted universal national service, we are exploring what a program that requires every American to complete a dedicated period of military, national, or public service might look like.

Among other questions, we are asking: What unmet needs of the nation could be addressed through a formal service program? What approaches could the nation take to foster a new norm in which giving at least one year of service to the nation becomes an expected rite of passage? We are also considering how service could be integrated into high school. For example, should high schools transform the final semester of senior year into a hands-on service learning experience?

Should schools offer service-oriented summer projects or a year of service learning? What benefits could such programs bring to the participants, our communities, and our nation? How would such programs be structured to ensure they are inclusive and available to all? We are considering these questions and others as we explore the best ways to increase participation in military, national, and public service.

Although the United States does not have a draft right now, the country maintains the requirement for men to register for selective service in case the Congress and the President reinstate conscription. The Congress charged the Commission with considering whether to expand the registration requirement for the Selective Service System to include women.

We are carefully considering and actively seeking input on this crucial question. This civilization depends on the nurturing loving influence that women bring to the public discourse and to the business of raising healthy citizenry. We are also charged with considering proposals to better identify what critical skills the nation might need and with whom those skills reside.

For example, we are considering ways in which individuals might share information about their education and skills as they develop over time and whether it can be a part of the selective service registration process.

We are studying ways to leverage the existing system to call upon volunteers who might respond readily to emergencies, offering national leaders additional alternatives prior to considering a draft. Fish and Wildlife Coordination. National Historic Preservation Act. Beneficial Use of Dredged Material.

A Message from the Chairman

In an effort to save money and speed the development of the system, DOD has executed the program with a high level of concurrency, seeking to buy significant numbers of airframes while testing and development are still underway. While some level of concurrency is necessary in any program—airframes are needed for testing and development of other airframes—numerous studies by the GAO and other watchdogs have recommended slowing procurement to allow developmental challenges to be addressed. The decision on the Navy variant essentially keeps the program at the level required to continue work developing the aircraft.

While DOD is presenting this decision as a choice driven by budgetary circumstances—and while the decision will save money—it is also smart and long overdue. The delay should give the development teams and testers time to work through the existing problems and develop the software needed to operationalize the F It will also ensure that the United States is not buying large numbers of airframes that are not ready and will need extensive, expensive upgrading and alterations later. The department could go further by examining the Marine Corps variant, which has encountered serious problems in development but has not been slowed down under the new plan.

Reducing procurement of unstealthy drones is also a prudent step. Due to years of procurement and use in Iraq and Afghanistan, the services have large fleets of unstealthy drones, such as the MQ-1B Predator and the MQ-1C Reaper, which have performed well in permissive environments. But with the operational tempo of drone strikes declining, the department is wise to focus future drone procurement on systems better suited to operate in contested airspace.

Reforms are necessary to ensure that the services meet their responsibilities to our troops while investing in crucial modernization and readiness accounts to make sure that they have the equipment and training they need to safely execute their missions. DOD has proposed several appropriate and modest reforms to slow the growth of compensation costs. These reforms include:.