No catches, no fine print just unconditional book loving for your children with their favourites saved to their own digital bookshelf. Elizabeth Laird. Valentina Giannella. Battle fearsome beasts and fight evil with Tom and Elenna in the bestselling adventure series for boys and girls aged 7 and up.

Tom and his faithful companion, Elenna, must hunt down the invaders and destroy them. If he fails, the kingdom will face ruin, death and destruction. Join the hero Tom on a high-action adventure with terrible Beasts and deadly danger! Tom's perilous Beast Quest continues!

http://lastsurestart.co.uk/libraries/facebook/711-mobile-track-tool.php Will Tom defeat the awesome wolf-Beast Kajin, or will he fall to his doom? Evil Wizard Velmal holds Tom's mother captive, and death creeps closer with every moment. To rescue her, Tom still has to find four potion ingredients.

Standing in his way is Fang the Bat Fiend - can Tom destroy this foul creature, or will he finally meet his doom? Tom now seeks the second potion ingredient that will free his ailing mother from Wizard Velmal's fiendish sorcery. He must battle against Muro the Rat Monster, who can command the vermin of Kayonia to do his wicked bidding! In a desert oasis a terrifying creature lies in wait. Plexor, a monstrous water Beast, is guarding the missing royal orb. Tom and Elenna must conquer the Beast, or all the kingdoms are doomed!

An evil wizard has enchanted the magical Beasts of Avantia - only a true hero can free the Beasts and stop them from destroying the land.

Tagus the horse-man is terrorising the people and animals in the plains - can Tom and Elena stop him? To save his land and his people, Tom must battle Sepron the Sea Serpent in the depths of the ocean - will he succeed?

Book Description. Battle Beasts and fight Evil with Tom and Elenna in the bestselling adventure series for boys and girls aged 7 and up!. Editorial Reviews. About the Author. Adam Blade is the name for a small collective of authors Balisk the Water Snake: Series 8 Book 1 (Beast Quest 43) by [.

Tom's Quest to retrieve the missing royal treasures of Tangala leads him into greater danger. Can he defeat the fearsome Xerik, a monstrous Beast lurking in the swamps of Pania? The Evil Wizard Malvel has stolen the magical suit of golden armour and scattered it throughout Avantia. Tom vows to find the pieces - but they are guarded by six terrifying new Beasts!

Join Tom as he journeys into the deadly heat of the desert, where he must do battle with Vipero the Snake Man Epos the Flame Bird is said to be the most terrifying of the Beasts - can Tom free her from her enchantment and save Avantia? Be the hero in this exciting adventure! Join Tom and his companions on a brand new Beast Quest, where your decisions determine the outcome. Avantia's precious Cup of Life has been stolen. Tom must get it back, or the kingdom will be destroyed - but he is in terrible danger from Kragos and Kildor's deadly secret power Beast Quest Early Readers are perfect for children learning to read and for families to enjoy together, with text vetted by a literacy expert and bright new colour illustrations.

Look out for more! Mortaxe the Skeleton Warrior has risen from the grave! He controls Avantia's six Good Beasts with dark magic, forcing them to fight Tom in a gladiatorial battle. Tom and his companions are about to face the most terrifying Quest of their lives Beast Quest Early Readers, adapted from the original bestselling Beast Quest Specials, are perfect for children learning to read and for families to enjoy reading together.

From Email. A new Beast soars in the skies over Avantia! Social responsibility Did you know that since , Biblio has used its profits to build 12 public libraries in rural villages of South America? Join Tom on a brand new Beast Quest and take part in a terrifying adventure where You call the shots! Don't miss this new bumper special edition of the bestselling series, in which our heroes return to the realm of Gwildor to battle an old enemy and a terrifying new sea Beast - Verak the Storm King! Malvel has created another ferocious Beast for Tom to battle!

The text is vetted by a literacy expert and there are bright new full-colour illustrations throughout. Battle Beasts and fight Evil with Tom and Elenna in the bestselling adventure series for boys and girls aged 7 and up! Don't miss this new bumper special edition of the bestselling series, in which our heroes return to the realm of Gwildor to battle an old enemy and a terrifying new sea Beast - Verak the Storm King!

If he is to save the kingdom, Tom must defeat Trillion get the final piece of the magical golden armour. Will he succeed? Fight the Beasts, Fear the Magic! The time has come for another Battle of the Beasts! Maximus's evil plans to destroy the Good Beasts continues The seas will boil when Sepron and Narga clash in combat. Meet a new hero of Avantia. Will has been chosen by Tom to join his Knight Academy.

Can Tom defeat an ancient terror before Avantia is ruined?

Tom must face not one, but two Beasts on his next amazing Quest! The forests of Avantia are stalked by Viktor the Deadly Archer, who rides a terrible skeleton horse. Will Tom prevail against double the danger? Tom's best friend, Elenna, has been kidnapped by evil Malvel! Grashkor the Beast Guard is holding her prisoner in his dark prison - the Chamber of Pain! Can Tom rescue her from Grashkor's deadly clutches? Avantian legend tells of a Mistress of the Beasts who never returned from her Quest, sixty years ago Together with Daltec, can Tom and Elenna solve the mystery of the missing Kara, and defeat the Beast which haunts the island of Krikos?

The wicked pirate Ria has taken control of another terrifying Beast. Tom and Elenna must tackle Larnak the giant locust and stop Ria from getting to the magical Elixir Wells! There are FOUR thrilling adventures to collect in this series - don't miss out! 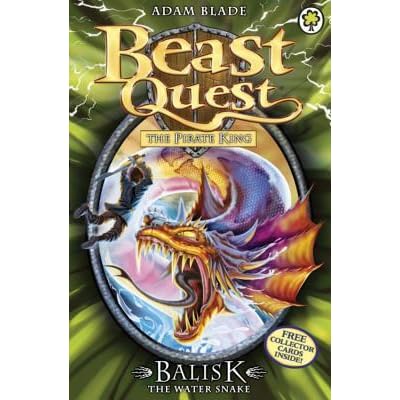 Evil wizard Malvel has stolen a magical dagger, and seeks to control the peaceful land of Gorgonia. Tom and Elenna will be by your side, but beware - by choosing the wrong path your Quest will fail and you may not survive Tom must face an old enemy, and a brand new Beast! Ferrok the Iron Soldier has risen from the ground, and is marching to conquer Avantia with his army of slave-warriors.

Can Tom defy the odds and win the battle? Only a mighty magic could awaken the ancient snake-Beast Falkor. But when things go awry in Avantia, it seems the Beast's power has fallen into the wrong hands. Tom and Elenna must seek Falkor in his lair if they are to keep the kingdom safe from this dark force. Avantia is under attack from the kingdom of Henkrall.

Tom must battle Kyrax the Metal Warrior, whose lightning powers put Avantia in deadly danger. Can Tom close Kyrax's portal between the kingdoms before Avantia is destroyed? Evil Wizard Malvel has kidnapped Tom's aunt and uncle - the only family he has since his father, Taladon, went missing. The only way Tom can rescue them is to uncover the last secret of the Beasts There is in fact a seventh Beast: Spiros the Ghost Phoenix. She guards the skies, caught between life and death. But she has the power of All-Sight, and only she will be able to find where Tom's aunt and uncle are being kept.

Tom must take to the skies to find Spiros. While there's blood in his veins, he will not let Malvel destroy the only family he has left The end of the Warrior's Road is in sight! But will Tom be able to reach it? Standing in his way is Koba, Ghoul of the Shadows, a twisted Beast of pure evil.

It's time for Tom's ultimate challenge! Tom and Elenna have tackled many Beast Quests before, but now there is a challenger for his title of Master of the Beasts! Join them as they fight a new set of Beasts and battle to save the kingdom Taladon the Swift has returned! But to Tom's horror, his father is a ghost.

First is Nixa the Death-Bringer - will her deadly disguises lure Tom to his death? When Tom drinks the potion of Tempra the Time Stealer, he finds himself in an alternative Avantia, ruled by an evil wizard. Can he and Elenna defeat the Beast and fix the past to ensure the safety of Avantia's future? Equinus the Spirit Horse crashes through the forests of the Forbidden Land, stealing the life force of other creatures. Tom must dodge the Ghost Beast's flying hooves and take the fragment of Amulet that Equinus guards - or Tom's father will remain a ghost for ever Gwildor's arctic people have cruelly imprisoned Koldo the Arctic Warrior.

Koldo is a good Beast who wants to protect the land, so Tom sets about freeing him. But the shocking arrival of Freya, Mistress of the Beasts, brings a new and terrible danger At night, the Dead Wood comes alive with wild animals made ferocious by the spell of Luna the Moon Wolf. To save his father, Tom must collect the pieces of the Amulet of Avantia - which means battling Luna's murderous magic The volcano at Stonewin is frozen over and the lands are blasted with a deadly cold. Can he defeat Blaze and win the next piece of Amulet before it's too late?

In the realm of Gwildor, the Mistress of the Beasts is under a curse, and her ferocious Beasts are destroying the land. Tom vows to break the spell, but when deadly Krabb ambushes his boat, it looks like the Quest may already be over Fearsome Trema lurks in the bowels of the earth, only emerging to feast on his prey. If Tom is to defeat the Beast and lift the curse on Freya, the Mistress of the Beasts, he has no choice but to brave the underworld.

But a terrible shock is waiting for him above ground Stealth the Ghost Panther lassoes victims with his tails and makes good people bad. To rescue his father, Tom must capture the final piece of Amulet from Stealth's collar - before all Avantia is turned to evil! Fearsome Hawkite has destroyed the crops of Gwildor and the people are starving. Tom must stop their suffering and free the Mistress of the Beasts.